Three generations of Punk Rock music fans have gathered at Vina Robles Amphitheater on August 18, many were dressed in punk uniforms, for a trio of performances that will be popular with the crowd. The three bands appearing represented three different eras of the punk genre and were all greeted enthusiastically by the multigenerational crowd.

Vina Robles, the finest outdoor venue in Santa Barbara County, provided the perfect backdrop for the punk marathon. The chairs have been removed from the front sections, allowing a general admission pit in front of the stage. The arrangement lent itself perfectly to the show, creating an optimal space for an ever-larger mosh pit, much to the delight of fans of dance-crazy concerts. A cool breeze kept the place comfortable throughout the four hour show. As usual in the pristine location nestled in the oak-fringed mountain in Paso Robles, smiling music fans arrived early to sample the winery’s produce, local beers, and delicious snacks, including pizzas from the fire. Of wood. Plus, many arrived early to secure the best seats on the coveted general admission lawn at the back. Music fans can bring blankets, chairs and their own picnics, making every concert an even more festive occasion. As a bright orange sun loomed over the amphitheater, the newest of the three punk-inspired groups, The Menzinger, opened the show. The Menzingers, a punk rock band from Scranton, Pa., Formed in 2006, wasted no time getting the dance started. Many in the crowd sported T-shirts with the band’s logo on it, testifying to the band’s popularity. Although the group has their musical roots firmly rooted in the punk genre, the sound generated by the quartet is surprisingly melodic. The band’s short eight-song set featured tunes familiar to the crowd, taken from their seven studio albums. Songs like “America (You’re Freaking Me Out)” and “I Don’t Wanna Be An Asshole Anymore” brought the mosh pit to life. Beaming singer and guitarist Greg Barnett rushed onto the stage, eliciting an increasingly frenzied response from the crowd. The group also included Tom May on vocals and guitar, Eric Keen on bass, and Joe Godino on drums. The group ended with their final signing with the title track from their album After the Party. The short set left the crowd screaming for more, but the best was yet to come. After a short intermission, the last rays of the summer sun bathed the room in an orange glow made even more prominent by the smoke raised in the air from the Northern California fires. Amidst this colorful backdrop, the band’s lead singer Descendants, Milo Aukerman, bikes on stage. Original drummer Bill Stevenson followed him. The two original members were joined by bassist Karl Alvarez and lead guitarist Stephen Egerton, who have been with the band since 1986. Then the quartet broke into the song “Sailors Choice” from their new album 9th and Walnut, and WTF! Shades of Frank Navetta, who wrote many Descending first songs before leaving to be a fisherman in 1983. Well, it turns out 11 of the new songs were written by the punk pioneer, and that one-minute or so introductory song started a music-hungry audience traditional punk live in an instant frenzy. With bands like X and The Sex Pistols, the Descendants are the real deal. Since 1979, they’ve blended Californian surf music with primitive punk beats into masterpieces perfect for public servants. Led by the exuberant Milo, 58, the group instantly connected with the three generations of punk fans at Vina Robles’ show, seeming to bring on pent-up teen angst in everyone, regardless. age. Milo is a larger than life character who left the group early on to become a buffed biochemist. He returned to the group periodically for short periods before ending his successful career with Dupont and returning to the Descendants full-time in 2016. Drummer Stevenson survived serious health issues including a brain tumor removed in 2010 and heart surgery in 2016. In his own words, “he felt reborn” after recovered and at the Paso concert that night he performed like a man. possessed by the spirit of Keith Moon. Alvarez and Egerton are seasoned musicians as well, and the quartet ripped up around 26 songs in under 90 minutes, sounding like the punk rock legends they are. After another intermission that saw a starry sky emerge from the summer twilight, Stand up against took the stage amid an explosion of stage lighting. The Chicago-based band has been producing their own brand of hard punk rock since 1999. The four veteran rockers had a huge task to keep up with the near perfect punk rock established by the Descendants. But backed by an enthusiastic supporting crowd, the band proved themselves up to the challenge, producing a raucous 90-minute set of ear-piercing hard-core rock. The band had plenty of material to choose from from their nine studio albums, including their latest, Nowhere Generation. Lead singer and guitarist Tim McIlrath connected with audiences early on, plunging them into moshing madness, launching into songs like “The Violence,” the lead single from the band’s eighth album Wolves. McIlrath also spoke passionately about the mutual isolation brought about by the pandemic before launching into the aptly titled “Audience of One”. Towards the end of the show, McIlrath performed two solo tracks, “Forfeit” and “Swing Life Away,” bringing some of the first quiet musical moments to the evening. He was later joined by bassist Joe Principe, guitarist Zach Blair and drummer Brandon Barnes for “Make It Stop (September’s Children),” a poignant song of hope for LGBT youth. The group ended their set with the equally poignant and relevant song “Prayer of the Refuge”. But the crowd was in no mood to go home and cried out for more. The band obligated, emerging for a three-song encore playing after the scheduled 11pm end time. No one in the sated punk crowd seemed to care. Punk rock is alive and well! Live music is alive and well! 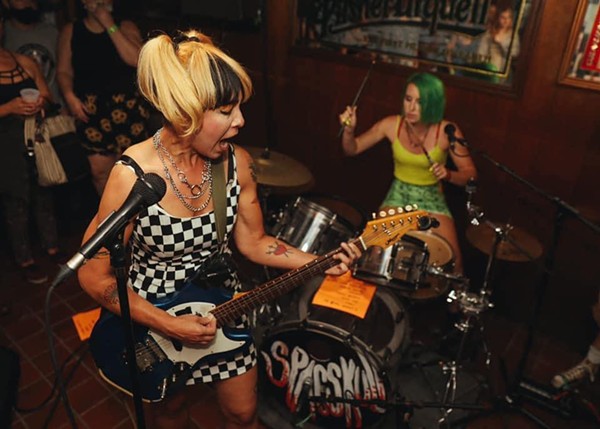